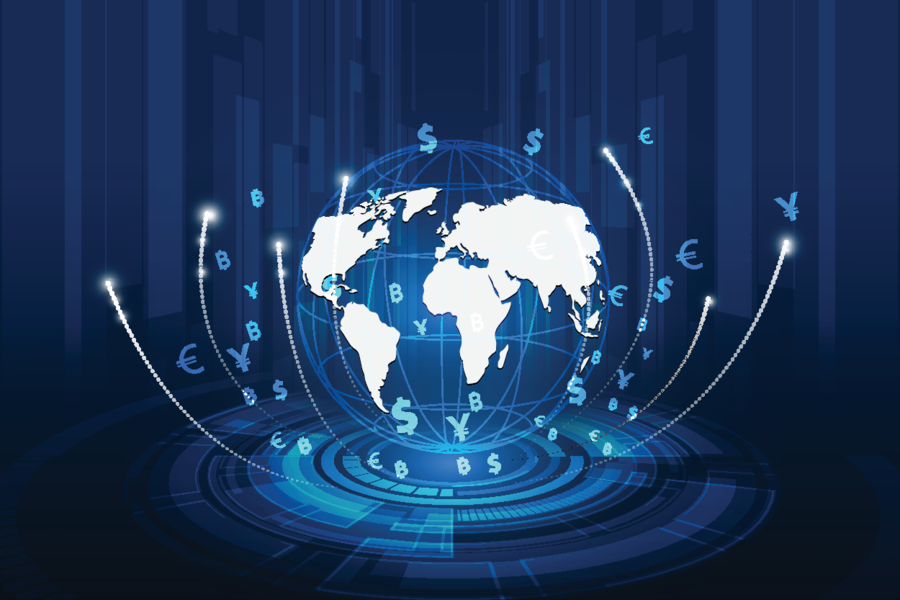 With the advent of blockchain, governments now face what they consider to be a new threat: the ascent and possible hegemony of (government) unbacked private digital currencies. The loss of sovereignty, as well as the exertion of economic influence through fiscal and monetary policy, are the main pain points that worry the decision makers of the worlds’ economies. Additionally, some believe that if remained unchecked, digital assets can affect the traditional banking system, destabilize the economy, and disrupt policy transmission mechanisms [1]. This resulted in central banks investigating the introduction of their own digital currencies, also known as “Central Bank Digital Currencies”.

In its simplest form, a CBDC is a

“digital representation of a sovereign currency issued by and as a liability of a jurisdiction’s central bank or other monetary authority” [2].

According to the Bank of England [3], CBDC’s are electronic Central Bank (CB) money that:

(i) can be accessed more broadly than reserves;

(ii) potentially have greater functionality for transactions than cash (such as improved efficiency on payment systems and cross border payments);

(iii) have a separate operational structure to other forms of Central Bank money, allowing it to potentially serve a different core purpose, and;

(iv) can be interest bearing, under realistic assumptions paying a rate that would be different to the rate on reserves.

Other characteristics that can sweeten the deal for CB are that CBDC’s can compete with private e-money and help transition to a cashless society, while diminishing cyberattacks and counterfeiting.

A 66 participant Bank for International Settlements (BIS) survey demonstrated increasing engagement of central banks in CBDC work. By 2019, about 4 out of 5 respondents had CBDC’s in their project folders, compared to 65% two years earlier. Nonetheless, it would seem that a small percentage of those interested are actually in a development/pilot phase, with the majority still doing experiments and proof-of-concept [4].

Retail and wholesale are the two main types of currencies that capture the spotlight. While retail CBDC’s aim to give access to every consumer out there (much alike cash, but with the subtle restriction of needing a mobile device and internet access), wholesale CBDC’s are restricted-access digital tokens for wholesale settlements (eg. interbank payments, or securities settlement). So far, retail and hybrid models are taking the lead over wholesale models [ibid].

Countries leading the cause of CBDC’s

Depending on their state, we can categorize CBDC projects in the following categories:

While over 55 countries currently have plans to launch their own digital currency and many have been conducting extensive research on the subject, only a handful are actually in an advanced state to launch it in the short-medium term (we consider those currently on a pilot program or further). Among them we can find China, Sweden, the European Caribbean Currency Union, and the Bahamas [5].

Fearing a wide acceptance of Facebook’s Libra, we can find China as team leader. With a prototype that is only now being tested by private and public hands, but that has been cooking since 2014, this world power wants to position itself as owning the first definitive strong CBDC before its 2022 Winter Olympics. Unlike its european counterpart, China has been seeing steady decreases in cash payments, which amounted to a bare 20% in 2018.

As one of the countries with the lowest cash-usage in the world, Sweden has recently transitioned from the 2020 e-krona pilot to a complete digital currency review that aims to finish by the end of November 2022. Even though it is taking cautious steps and aiming to get every aspect right, those steps are bigger than many other countries have taken [6][7].

The Eastern Caribbean Currency Union is the third in the list of most advanced CBDC projects. Its central bank, ECCB, has been testing the retail Caribbean Dollar (DXCB) pilot program since March 2020. With current cash payments amounting to over 80% and traditional digital payments being costly, the issuance of a CBDC can prove a game-changer.

A place with geographic barriers of payments and money distribution, the Bahamas have around 380,000 people living scattered on the 700 islands, and initiated their own CBDC project called the “Sand Dollar.” Although counting on a stable –pegged-  currency and high levels of bancarization, there are still many groups in the area that are excluded from banking services. With its launch in October 2020, the Sand Dollar made the Bahamas the first country in the world to officially roll out a CBDC. 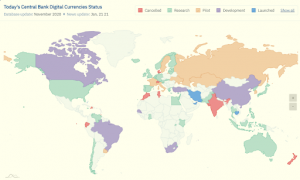 Typically, the U.S. leads the vanguard of research and development of most technological advances, but the case of CBDC’s appears to be the exception to the rule. While effectively dedicating plenty of resources on the research of blockchain technology and its application for a U.S. CBDC, most high-ranked officials have told that they do not intend to lead in this race. Case in point, the current strategy involves carefully analyzing the effects that CBDC have on foreign economies, and adjust plans, if needed, for the development of the domestic one [9].

Similarly, the U.K. and Russia should be “further along than they are, but are not” [10]. In the case of the U.K., it can be because they assign too much focus on researching rather than “going forward.” Russia, on the other hand, sympathizes with the U.S. and doesn’t have the objective of being first in the race. Despite having banned cryptocurrencies in the country, the Russian central bank has recently set up to create a digital ruble to replace unreliable payment mechanisms, as well as to create new layers for money transferring, (tax) payments, conversion to foreign currencies and store of value [11][12].

Despite still being in its infancy, the development of CBDC’s is likely to see exponential growth in 2021. As the countries leading the cause of CBDC’s will test the technology and use of the digital currency in their own markets, adoption is likely to increase and gain the attention of other countries. To keep up to date with developments happening in the blockchain industry, subscribe to receive news and engaging articles on the topic.

Need to build your own digital currency? Scalable Labs can help.

[8] For a continuously updated platform on CBDC advancements, please visit:

[10] Hinchliffe, Ruby. “UK CBDC Researcher: We Should Be Further along than We Are.” FinTech Futures, 15 Dec. 2020, www.fintechfutures.com/2020/12/uk-cbdc-researcher-we-should-be-further-along-than-we-are/.